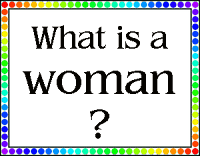 For those who have recently watched the documentary, “What is a Woman?,”1 and thereafter observed the web and media frenzy, fanaticism, and coercive fallout, it should be obvious how far we have descended into a tyranny of  “make-believe”; thus the question: How much are we each going to participate in sustaining that tyranny? Are we, in alleged sympathy / empathy2 or fear, going to help normalize and parrot the fictions that, at core, mock the creation and particularities of male and female?3 (especially the female?)

Surely we should not be surprised that an all-encompassing tyranny of fiction should be the prevailing character of these end-times? We may never have imagined the various directions that the pretenses would take, but have we not been warned?

Most of us have (so far) survived the myriad deceptions of the COVID narrative, but now, an even more transparent narrative of trans-supremacy is taking center-stage where all people must affirm the new-genders narrative or be targeted for bullying, phobic-labelling, or character destruction, in déjà vu of other tyrannies as described by Solzhenitsyn:

The permanent lie becomes the only safe form of existence, in the same way as betrayal. Every wag of the tongue can be overheard by someone, every facial expression observed by someone. Therefore every word, if it does not have to be a direct lie, is nonetheless obliged not to contradict the general, common lie. There exists a collection of ready-made phrases, of labels, a selection of ready-made lies. And not one single speech nor one single essay or article nor one single book— be it scientific, journalistic, critical, or “literary,” so-called— can exist without the use of these primary clichés. In the most scientific of texts it is required that someone’s false authority or false priority be upheld somewhere, and that someone be cursed for telling the truth; without this lie even an academic work cannot see the light of day. And what can be said about those shrill meetings and trashy lunch-break gatherings where you are compelled to vote against your own opinion, to pretend to be glad over what distresses you?5

The choice — live by lies or “live not by lies” — is being forced upon more and more of us with each passing day. Make one mis-speak against the supreme narrative and the browbeating, bullying  begins. But considering that Satan has been called “a liar from the beginning” and the “father of lies” (whose agenda is to deceive and destroy the world6) should we not be exceedingly vigilant in discerning and standing for truth and against pretense; refusing to be groomed into accepting fantasy claims that biological men are women with the capacity to give birth? It seems we are progressing from one mass-psychosis event to another, as so graphically described here.7

Yes, I believe struggling dysphorics (and their advocates) must be free to voice their feelings and beliefs, but they must not be affirmed in believing they have a right to compel others to believe or advocate for their beliefs, feelings, or claims. As to so-called professionals advocating for and profiting from (irreversible), surgical intervention for dysphoric minors, perhaps they can be compelled to endure awareness training sessions (in similitude of those compulsory sensitivity ones) in order to discern their placement on the mass-formation psychosis spectrum, as well as to learn the difference between science and pscience.8

To bolster and understand the need for courage and commitment to truth and reality, please listen to this truth-filled podcast. Let us choose to “live not by lies.” The consequence for choosing otherwise leads to destruction.9 Let us each be a brake against a deepening mass-formation psychosis.

Staying Alert to the Source of “Great Signs and Wonders”*? In recent days, we have witnessed a reversal of the 1973 Federal co-option of alleged state power.1 Many seem to view the SCOTUS decision as a great sign that the United States is re-affirming its former values. Some consider it an almost unbelievable wonder that in this current climate of iniquity and escalating abuse of children and power, that SCOTUS would make such a “course-correction.” But are we being too naïve about agendas? — about the appearance of things? We already see how this has created another acrimonious division, inflaming those who believe they have been stripped of a long-standing, federally-guaranteed right. So, being the skeptic that I am, I cannot help but wonder if time will soon reveal that this seeming “light”2 in a dark landscape is really artificial. What is the real inspiration for this reversal? What is its real purpose? I do not know, except that the prevailing iniquity and secret combinations at the highest levels are so pervasive, it puts almost every action of the powers in doubt of legitimacy or good purpose.

Will this turn out to be in the nature of a Cain-like offering?

Some have speculated that Cain's offering (fruit of the ground) was unacceptable as God required a sacrificial animal, but from Mosaic laws and temple endowment, both the first fruits of the field and the firstlings of the flock were commanded at varying times. Of course, Cain's fruit might not have been firstling or best, but the defining reason for the rejection of Cain's offering by God is probably answered in the words: “And Satan commanded [Cain], saying: Make an offering unto the Lord.”

Is this SCOTUS decision a genuine offering of repentance and return? Or should we also ask: In these last days of testing, trial, and rampant deception, what will the adversary of all Good not wrap in artificial light? How on guard must we be to discern what unfolds by the inspiration of God and what unfolds at the command of the enemy?

Time and Truth will eventually reveal motives and purposes, though, for the sake of those who sincerely seek the Good, God seems always able to bring Good out of bad if or when intentions by others are corrupted.

1. https://en.wikipedia.org/wiki/Roe_v._Wade
https://www.npr.org/2022/06/24/1102305878/supreme-court-abortion-roe-v-wade-decision-overturn
https://aclj.org/overturn-roe-v-wade-and-save-unborn-babies
2. New Testament | 2 Corinthians 11:14-15
14 And no marvel; for Satan himself is transformed into an angel of light.
15 Therefore it is no great thing if his ministers also be transformed as the ministers of righteousness; whose end shall be according to their works.
Book of Mormon | 2 Nephi 9:9
9 ... that being who beguiled our first parents, who transformeth himself nigh unto an angel of light, and stirreth up the children of men unto secret combinations of murder and all manner of secret works of darkness.
Doctrine and Covenants | Section 128:20
20 ... The voice of Michael on the banks of the Susquehanna, detecting the devil when he appeared as an angel of light!
Doctrine and Covenants | Section 129:8
8 If it be the devil as an angel of light, when you ask him to shake hands he will offer you his hand, and you will not feel anything; you may therefore detect him.
3. Pearl of Great Price | Moses 5:18-19  (Bold emphasis added.)