With a Voice of Singing* 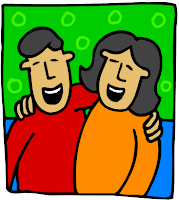 In our local paper this week, a front-page headline read:

The column text read in part:

“... top doctor says people can sing and play wind instruments indoors once again, provided COVID-19 precautions are in place. / ... says those activities were severely restricted because they were thought [1] to poise unique risks of spreading the virus. / But she says new evidence shows they can be done safely with certain safeguards. // ... Choirs can restart with maximum size limits and masks, but audience singing is still not allowed.” (Bold emphasis added.)

Not allowed?! Is such a continuing ban conceivable? YET it is mandated — in many places all over the world! Even in our world-wide, choir-famous church! And we acquiesce?!2

Do we not understand the everlasting role of singing in God's kingdom? that the song of the righteous is a prayer unto [God]?3 perhaps the most powerful prayer considering the hundreds of references in scripture and prophecy to singing?4 Have we ever witnessed the incredible power of hymns, spirituals, and other songs to change ambience; strengthen endurance; lift souls; even perhaps, precipitate an earthquake when it was needed?5

Is the ban on singing because of COVID or about something else? What if singing could change the world? What if the most powerful prayer is the song and we have gone silent? What if all the outrage, cursing, cries, and so forth at protests and marches were channeled, instead, into songs of faith, hope, charity, and rejoicing in the strength of unity? Could it change the mood of protesters, enforcers, and perhaps even counter-protesters?

What if gifted choirs and vocalists would gather as flash mobs6 all over the world at capitol buildings, parks, city squares, corporate / media offices, “elite” conferences, freedom / protest marches, and so forth, and sing songs of hope and joy, (including, where appropriate, songs of praise for the God of Heaven, the Creator of Heaven and Earth)? songs of rejoicing in life and freedoms — not dirges of piety or judgment, but upbeat songs, from whatever source or time, that lift the soul? Could such songs soften the hearts of “authorities,” leaders, planners, protesters? Could composers and lyricists rise to the challenge? grant rights to activists / marchers / flash mobs to perform already existing works that “cry freedom”? (Perhaps we could begin with Bobby Darin's “Simple Song of Freedom”  —  Della Reese style.)

And maybe, just maybe, song could inspire renewed courage to stand for rights and freedoms in leaders who have been compromised or fear-driven to the point they feel no choice but to “obey orders” from behind-the-scenes “superiors”? Instead of cursing at seeming or budding tyrants, could we sing rousing songs of freedom and encouragement for them to stand with integrity? Let them know we understand the over-arching tyranny that rules them, even as presidents, prime ministers, premiers, governors, et al., but that the tyranny that rules them does not justify their passing it down? Remind them that our commitment to honoring obeying, or sustaining law applies only to Constitutional law and to the service of honest, wise, and good men and women?7 Could we even ferret out the controlling insiders and “plague” them with song? Instead of chanting robotic phrases, let us sing great songs that stir the soul.

Perhaps singing would prove the greatest protest strategy of all time and result in calling God out of His hiding place to end the evils that the weaknesses and obsessions of mankind have brought to such a point as this escalating world-wide tyranny.
Let us remember:

Go ye forth of Babylon, flee ye from the Chaldeans, with a voice of singing declare ye, tell this, utter to the end of the earth; say ye: The Lord hath redeemed his servant Jacob.8

[and] he inviteth ... all to come unto him and partake of his goodness; and he denieth none that come unto him, black and white, bond and free, male and female; and he remembereth the heathen; and all are alike unto God, both Jew and Gentile.9