To a young child, (yea, even to many a teenager), the rules, limitations, suggestions, and corrections of a parent often seem irrational, unreasonable, and malevolently designed to crush the enjoyment of life, liberty, and the pursuit of happiness.

Well, guess what? Doesn’t life witness that what is irrational to the child is really transrational his/her juvenile perspective; that there is a state of higher awareness—a more encompassing view to consider? A similitude of:

So perhaps the déjà vu litanies of the rationally-bound man through the ages1 are just irrational tantrums upon the hierarchy of man’s evolving identity and destiny. Of course,“rational” beings have many reasonable things to say and insightful observations upon many topics, but when they construct opaque ceilings, one wonders: What are the distortions when “Up” is excised from the quadrants of inquiry? 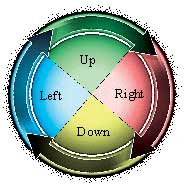 
1. We inquired and observed full circle instead of excising our own offensive quadrant?
2. We allowed all to worship (or not), how, where, or what they might, without trying to expunge them?
3. We were free to speak our minds, but rational and transrational enough to agree to disagree agreeably?

For now we see through a glass, darkly; but then face to face: now I know in part; but then shall I know even as also I am known. (New Testament 1 Corinthians 13:12)


In recent days, a commenter (#48, 53) at the TIMES AND SEASONS website1 wrote how he had heard Ayn Rand quoted and recommended in priesthood meeting. And why not?! Despite her fervent atheism, didn’t she propagate profound truths? Just ask Paul Ryan.2 Or Ron Paul. Or Rand(al) Paul. Or Alan Greenspan. Or scores of evangelicals. Or unnumbered current and former BYU students.


Ayn Rand for years was the most popular author by far here in the [BYU] bookstore. They would sell more of her books than any other [author's], and her books have such titles as The Virtue of Selfishness.3

It has been the same [old] story all along, only suddenly we have reached a new level. For the first time selfishness goes by its own name: "The virtue of selfishness" is the testament of Ayn Rand, the guru of Milton Friedman, Alan Greenspan, and James Watt, long the favorite reading of BYU students. "No other civilization has permitted the calculus of self-interest so to dominate its culture," writes R. L. Heilbroner; "it has transmogrified greed and philistinism into social virtues, and subordinated all values to commercial values." This is exactly what Thomas More said: "What has heretofore passed as unjust, . . . they have turned upside down, and in fact proclaimed it publicly and by law to be nothing less than justice itself." Mr. Ivan Boesky, in a college convocation, commended "healthy greed" as a virtue to be cultivated by the young.4

This was my response (#57) at the Times and Seasons:


(Re: # 48, 53) The love affair with Ayn Rand that “informs” the political economy of too many Mormons (and other Christians) is simply a déjà vu seduction—the latter-day version of God’s perpetual complaint against His chosen[5] people (as detailed in Isaiah, Jeremiah, Ezekiel, Nephi, etc.). A condensed version of Rand’s philosophy can be found at Alma 30: 17. For the looong version read John Galt’s radio address from Atlas Shrugged. Or if you have [one has] the time and endurance, read the book and monitor the skill of seduction. Then do your own comparative; (mine is at http://www.dejavu-times.blogspot.ca/2012/11/comparatively-speaking.html ). Considering the enduring influence of Rand, maybe more of us need to be informed enough to protest the co-mingling of Rand and God, which I suspect is anathema to both.

A digital PDF version of Galt’s speech can be found at pp. 767-814 http://www.mises.ch/library/Rand_AtlasShrugged.pdf

So you see, it’s the “Same Old Story” (SOS!). Seeing [snippets of Ayn] we see not; hearing [sound bites of Ayn] we hear not how utterly flawed her premises are. She was always advising others to check their premises. Her own premises, having emerged in her mind at the age of 2½ years,6 were beyond further scrutiny (or observation).

The altruism she despised, that had been preached for thousands of years, was, for her, the root of evil. If she had believed in God, she might have checked her premises against both His word AND “objective reality” (which we can all do). In scripture, she would have found the lament that evil arises, not by the failure of altruism, but the failure to live its precepts; by the insistence on doing and having things our own way; and through neglect of the two great commandments.7 But no, Ayn’s supposed solution was to espouse the same old selfishness (SOS! again) that has plagued the natural man8 since before Day One.

So yes, let us get informed about Ayn and her [faux-]Objectivism and refuse to sustain the unsustainable. Some of her criticisms of government have legitimacy, but her solutions have NONE. If we don’t understand that, her proffered solutions will only exacerbate the dire problems of selfishness that she falsely attributed to altruism.

-----------------------/
1. http://timesandseasons.org/index.php/2012/11/still-outside/
2. http://www.youtube.com/watch?v=WmW19uoyuO8&feature=endscreen&NR=1 . (There are other avowals of Rand influence, but Ryan backed off those in 2012 because of adverse publicity.)
3. Hugh Nibley, Teachings of the Book of Mormon--Semester 1: Transcripts of Lectures Presented to an Honors Book of Mormon Class at Brigham Young University, 1988--1990 [Provo: Foundation for Ancient Religion, 310.
4. Hugh Nibley, Approaching Zion, edited by Don E. Norton [Salt Lake City and Provo: Deseret Book Co., Foundation for Ancient Research and Mormon Studies, 1989], 466-467.
5. “Chosen,” not in the sense of unearned favors, but chosen to be witnesses and examples to the world that there is more to life and eternity than power, fame, and stuff.
6. Ayn Rand interview with Tom Snyder (1 of 3) from 8:09 – 8:38 seconds at http://www.youtube.com/watch?v=4doTzCs9lEc
7. New Testament Matthew 22:36-40: Master, which is the great commandment in the law? Jesus said unto him, Thou shalt love the Lord thy God with all thy heart, and with all thy soul, and with all thy mind. This is the first and great commandment. And the second is like unto it, Thou shalt love thy neighbour as thyself. On these two commandments hang all the law and the prophets.
8. Book of Mormon Mosiah 3:19: For the natural man is an enemy to God, and has been from the fall of Adam, and will be, forever and ever, unless he yields to the enticings of the Holy Spirit, and putteth off the natural man and becometh a saint through the atonement of Christ the Lord, and becometh as a child, submissive, meek, humble, patient, full of love, willing to submit to all things which the Lord seeth fit to inflict upon him, even as a child doth submit to his father.
Posted by SMSmith at 2:19 PM